The Sherbrooke Village Indigenous Art Centre opened in June 2019. We are currently featuring the Artwork of Halina Stopyra and the late Jay Bell Redbird, from the collection titled: “Expressions of Mother Earth". 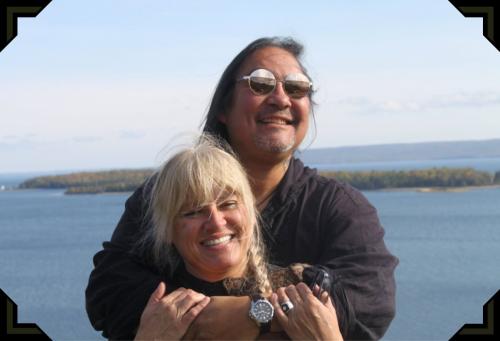 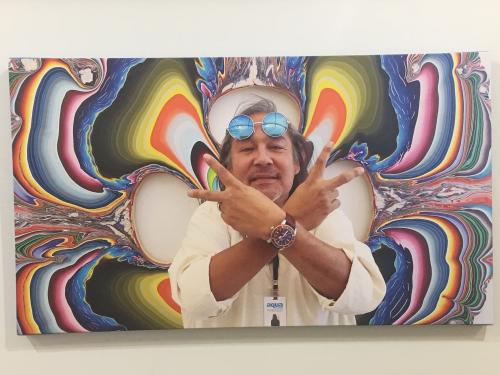 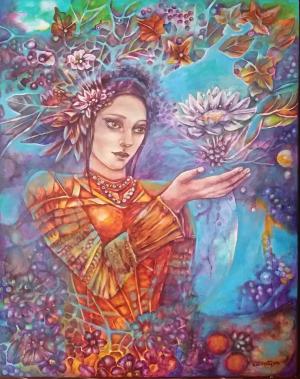 Since a young age, Halina has been drawn toward the healing arts.  This natural inclination has led her into a career as a physical therapist and later in life, as an artist.

“My intention is to remind the viewer of how intricately connected we are with nature, each other and the universe. As a result, we realize how strong, resilient and capable of healing we are.”

She has been inspired and influenced by mythology, folk tales and stories, finding familiar archetypes all through the ages and across the planet.  "We are all co-creators and magic makers, and by the very act of creating and expressing our spirit we are changing the world and adding to its expansion".

Face and the human form is often the focal point of her composition.  “Faces are capable of inspiring empathy and self-reflexion, from within each of us a seemingly invisible but vibrant world thrives.”

The intimate self is expansive, and as water flows in every direction, Halina’s favourite medium is, therefore, water colour.

As a founding artist of Redbird Gallery, Halina splits her time between Toronto and Cape Breton where she blissfully create art and contribute to the well-being of their communities and environment.

Halina’s statement is:  “One Love " 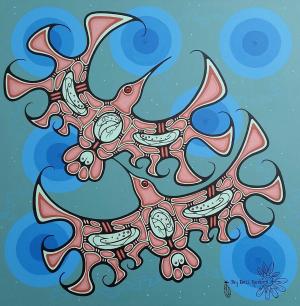 Jay Bell Redbird was born Aug. 31, 1966, in Ottawa, Ontario and sadly, has passed away recently in Cape Breton. He was the son of proud parents Elaine Bell (late) and Duke Redbird. Jay was a member of Wikwemikong, Unceded Indian Reserve.

As a founding artist of Redbird Gallery, Jay was a self-taught artist, who grew up surrounded and influenced by world renowned artists like Jackson Bready, Norval Morrisseau, his uncle Leland Bell and his father, painter, poet and writer Duke Redbird.

Jay Bell once said, “I paint from my heart and soul, viewing Aboriginal people through their life ways as they once lived and as they strive to continue to live as loving, caring and peaceful people. The teaching and stories I have learned flow to the canvas expressing ideas through my detailed, woodland style of art, a style that I connected with as part of my history passed down from generation to generation. I paint legends and dreams, bringing to life the animal spirit and the spirit of all creation. My lines do not tell the story of prejudice, they follow the Red Road, Mino Bimaadiziwin as I do following the teaching of the Three Fires Midewiwin Society”.

As a teenager, Norval Morrisseau talked to Jay about the colours and their meaning and how they are expressed in Aboriginal language, history and culture. His uncle Leland showed him techniques and shared traditional teachings and stories. His father Duke Redbird encouraged Jay to put his art out there to share the beauty of Aboriginal culture.

Following these formative years, Jay continued to learn and find his own unique voice through his paintings which are vibrant in colour, stories and meaning.

Jay’s Statement: “To share my work with all Nations and promote lasting peace and love”.